For the 100th day of school Kathleen was to dress as a 100 year old. I took her to the store and we looked for something an old person wold wear. I tried to get her to go with paisley, but Kathleen has her own sense of style, even when dressing like a great grandma.

Lucy was home from school today with a cold, so she and I played store. This is an especially fun activity since Jennifer got us some school, play money. (This also allows me to make Lucy do math, but don’t tell her that).

She started off with $157, and with that she bought several stuffed animals and a pair of shoes, all of which we had brought out to the “store” from her bedroom.

This left her with one last dollar. Then she asked what it would cost to buy one more stuffed animal. I told her that it would be $21. She slid her dollar over to me with a sheepish grin. But I decided this was time for one of life’s difficult lessons. So I said: “Sorry mam. But if you don’t have enough money, I can’t sell it to you.”

Lucy looked around perturbed. Then she picked up some napkins, a green marker, and announced to me: “I need to go to the restroom.” She opened an imaginary door, moved slightly to her left, and closed the door behind her. Then she sat down at a stool, and created for herself several more $10 bills.

I don’t want to encourage a life of crime for my daughter, but I did go ahead and sell her the stuffed animal. 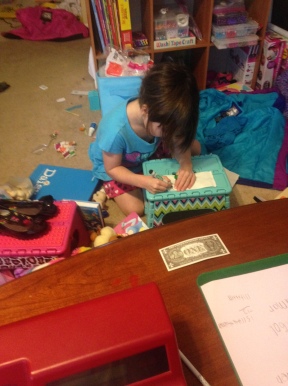 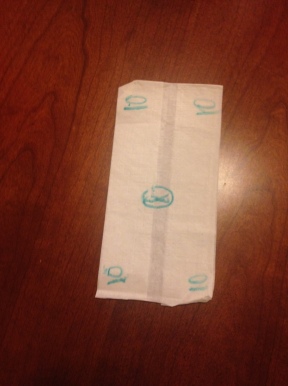 Clothes shopping with Lucy tonight. I asked her to stand normally so we could send pictures to Jennifer for her opinion. Eventually I gave up. 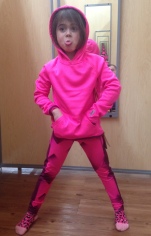 A few weeks ago Kathleen dropped a taco chip on her shoulder, so I took a picture and shared it to let everyone in on the visual pun.

Tonight at dinner she picked up the butter (I don’t know why, her parents have clearly failed to civilize the girl) and got it all over her hand. I called her “butterfingers” and pulled out my phone to get the shot.

Kathleen immediately made this face and said: “You are NOT going to put this on the internet!”

A few months ago, Lucy’s teacher alerted us that she was complaining that things were “fuzzy” around her. We asked her about this and she confirmed that she felt that her sight was getting blurry. So Jennifer took Lucy to the eye doctor.

At the doctors office, in front of the eye chart, all of a sudden she not only had problems seeing, she appeared to forget her letters. Even on the big E at the top, she claimed she couldn’t see it. The doctor suggested that either our daughter had gone blind, or she had friends with glasses and really wanted a pair for herself.

When we got home, we talked with Lucy and confirmed that she threw the eye exam. We told her that, given the genes she had inherited, she would certainly need glasses one day, but she didn’t yet.

The eye problems went away for a while. Only in the last week has Lucy returned to her claims that the world around her is fading.

So it was that, while Jennifer and Kathleen were away one night, I heard Lucy from the living room “Dad, I can’t see anything. Everything has gone dark!”

Worrying that we might have missed something serious because we thought she was pretending, I rushed in to see what was happening. There was Lucy, laying on the ground, TV and lights off, with her sunglasses on. She looked up at me like Joe Cool, and said “I can’t see anything.”

The next night we took her by Walmart and bought her a $10 set of glasses.  No prescription, just the glasses. Silly little girl. But, you know, it is a good look for her.

After the four day weekend, Jennifer put post-it notes on the girls backpacks saying “Love you Lucy” and “Love you Kathleen.”

The girls noticed them as soon as we came out for breakfast. But I did a fake sad face and cried crocodile tears, saying: “Mommy didn’t leave me a note!”

So, a few minutes later, Lucy came up and handed this to me. 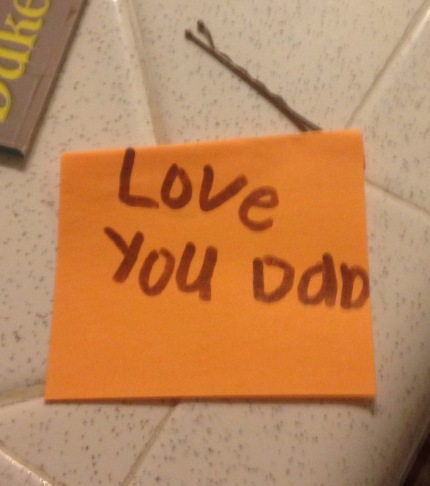 Just got back from five days at a conference.
Kathleen (age 9): Well, this family sure has changed while you were gone.

Me: Really? How? Did you get married?

Kathleen: No, but I am not ticklish on the bottoms of my feet anymore.

It’s hard being away for these major milestones.

The Eremitic Family Man
Create a free website or blog at WordPress.com.