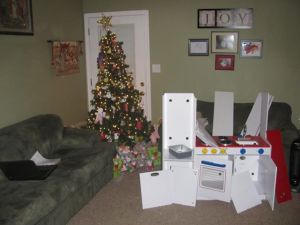 What is that look of disappointment o daughter of mine? OH, MY! It is almost as if Santa’s elves just got too tired putting together your play kitchen and went to bed instead of finishing it … 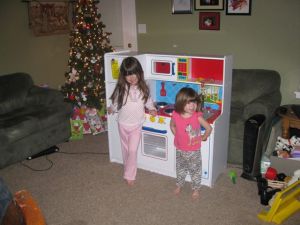 After a long campaign in which David’s reign had been threatened, and his people had been subject to attack, David had finally consolidated his power. He took land from neighboring countries in order to provide a buffer between Israel and its enemies. He developed military technologies that dwarfed that of his neighbors. But still, he felt threatened. So it happened, late one afternoon, when King David rose from his couch and was walking about on the roof of the king’s house, that he could see a land just beyond the internationally recognized boundaries of Israel; his army had already occupied the land, but non-Israeli’s continued to live there. David sent someone to inquire about the land. It was reported, ‘this is Palestinian territory, the land of the Palestinians.’ So David sent Israelis to settle in the land, and built a wall for the security of Israel that encompassed much of what was previously Palestinians territory, and because the Palestinians were without military might or powerful supporters, the land quickly fell to David.

But the thing that David had done displeased the Lord, and the Lord sent the prophet Nathan to David. He came to him, and said to him, ‘There were two men in a certain city, one rich and the other poor. The rich man had very many flocks and herds; but the poor man had nothing but one little ewe lamb, which he had bought. He brought it up, and it grew up with him and with his children; it used to eat of his meager fare, and drink from his cup, and lie in his bosom, and it was like a daughter to him. Now there came a traveler to the rich man, and, he was fearful of thinning his flock lest he be without sufficient meat at some point in the future, but he took the poor man’s lamb, and prepared that for the guest who had come to him.’ Then David’s anger was greatly kindled against the man. He said to Nathan, ‘As the Lord lives, the man who has done this deserves to die; he shall restore the lamb fourfold, because he did this thing, and because he had no pity.’

Nathan said to David, ‘You are the man! Thus says the Lord, the God of Israel: I anointed you king over Israel, and I rescued you from the hand of Jordan, Egypt, Syria, and Lebanon; I gave you the house of Israel and of Judah; in the face of previous conflicts with the Palestinians I have given you military superiority and American power to support you. Why have you despised the word of the Lord, to do what is evil in his sight? You have struck down the Palestinians with the sword, and have taken Palestinian territory to be your land, you have deprived a people of the right to self-rule, robbed from the West Bank and have overseen the development of humanitarian crises in Gaza.’ David said to Nathan, ‘I have sinned against the Lord.’