Lucy: [on antibiotics, but still coughing from her two-week-long cold] “I’m dying.”

Kathleen: [in full emo character] “We are all dying.”

Me: ”Well, parts of us are always dying. We lose skin cells. We breath out dead cells. But at the same time we are making new cells. So we are all dying, and we are all coming to life at the same time. It all kind of balances out.”

Kathleen: “For someone my age, I guess. But you, dad …. mostly dying.”

No matter how the conversation starts, somehow it always ends with me getting roasted by my daughters.

14° at time for school this morning, and my daughter doesn’t bring a coat with her. She did this by choice. We turned around half way to school and returned home to get her coat.

1) she is a complete dumbass.😐

One of Lucy’s teachers gives “teacher bucks” for attendance and good behavior. With these, students can buy various trinkets. Most students get different things each time. But Lucy has decided to invest over the long term … she is building A RUBBER DUCK ARMY! 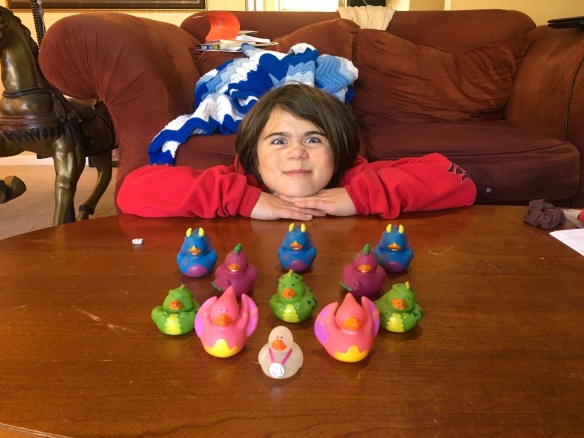 Kathleen’s monologue as I drove her to school this morning: “Why did summer have to end? Only two weeks ago I was sleeping in until 11:00. I FELT LIKE A GOD! And now I am in hell.”

Lucy walks into the living room with Kathleen holding onto Lucy’s neck, being almost dragged along behind her.

Lucy: “You are the worst cape ever.”

The two of them disappear around the corner into the kitchen.

It’s tempting to think that what just happened was a kind of absurdist piece of performance art done for my benefit, but I’m not sure they even actually noticed I was here.

For the last two nights Lucy has walked around the house with her shin guards, soccer socks, and cleats on. We don’t even have our first practice till Thursday. Between you and me, I’m a little scared that she’s into this for the fashion rather than the sport.

The other day, as is my wont, I was explaining Socrates to my daughters …”The Oracle at Delphi told Socrates friend that Socrates was the wisest man. So Socrates decided to try to prove the Oracle wrong. He went around and asked apparently wise people questions. But it turned out that when they answered him, they were confused about everything. Socrates was the wisest person because he knew that he didn’t know anything.”

Kathleen: “That makes no sense.”

Me: “Everyone else thought they knew things, but they were wrong. Socrates knew one thing, that he knew nothing. So he was right.”

Lucy: “It’s funny, because I only know one thing … It’s that Kathleen doesn’t know anything.”

Next, I really need to teach them only to use philosophy only for good and never for evil.

This weekend the girls had a friend over for a sleepover. Kathleen and their friend succeeded in staying up all night (Lucy crashed about 4AM). Mercifully, Jennifer and I slept through most of the night, but I do remember feeling vaguely aware at some point in the night that Kathleen put on her full Taekwondo uniform. Thinking it might have been a dream, I asked about it the next day. Sure enough, up on their own, the girls were convinced they heard an intruder in the house. So at about 2:00AM, Kathleen dressed herself to train the other girls and lead them into battle. I apparently woke up enough to see Kathleen across the hall in her uniform, shook my head, then rolled over and went back to sleep. That’s what we call #parenting

Lucy: “Do you believe in hell?”

Me: “But it’s more complicated than that. So, like, I don’t believe that there is a place under the earth …”

Me: “Well, but, I do think that Hell is being separated from God. So, Hell is when you turn away from God. … You know what that means?”

Me: “Hell is like eating ice cream with a fork.”

Tonight for our bedtime story we were covering the Epic of Gilgamesh, in which the goddess Ishtar punishes Gilgamesh for rejecting her. Lucy was confused by the idea of a spiteful goddess, so I had to explain that in many ancient religions the gods were not moral. This began the following exchange.

Lucy: “Oh, so their gods had feelings.”

Me: “Well Christians believe that God has feelings, but all of them are good feelings.”

Kathleen: “No, God gets angry sometimes.”

Me: “Yes there are stories where God gets angry, but what does God get angry about?”

Lucy: “Like when someone eats ice cream with a fork!”

From now on, if asked for the paradigm example of a sin, I am prepared.